I've had this poem
running around in my gut
for a while.

time, shortened
by needle pricks, waits
for no one

and this poem was
just not ready.

it's about this great
improbable love
i feel for you.

an ancient cedar tree,
stuck out of a
limestone cliff face,
something to hold on
to when I fall.

because we all do.

a vase, filling with water,
just before the flowers
sink.

a crocodile's tolerance
of the bird that cleans its teeth.

it hurts to realize how
much i love you.

but it hurts worse to
imagine life without you.

i would have no teeth
for this apple.
Posted by Trevor_Cunnington at 8:48 PM No comments:

The media coverage of this strike has been sorely lopsided so far. While the members of the union have taken culture and media production into their own hands, we know that the large audiences are in the hands of the big media corporations. So far, their coverage has been overwhelmingly biased towards the undergraduate student perspective that argues that the union is blockading their education.

On the newsclip that CityTV aired on November 6 on their website, they interviewed three undergraduate students, Union representative Graham Potts, and Alex Bilyck, York Administration’s Public Relations official. They spoke to no union members (or at least, they did not air the members’ viewpoints) whatsoever, aside from Mr. Potts. Of the three undergraduate students interviewed, one supported the strike, and two opposed the strike. The news clip ended with a fourth year business undergraduate lamenting his four year degree possibly lasting slightly more than four years, attempting to leave the audience with an emotionally charged anti-union stance. This attempt seems to have worked, seeing as over fifty percent of people opposed the strike in a three-pronged online poll that measured support, neutrality, and opposition.

In a Toronto Sun article dated November 7th, Alex Bilyck cited the hourly wage of Teaching Assistants as over $60/hr. While those with external/internal funding packages might approach that rate of compensation, this is by no means the norm or even common. To do a good job at teaching, the preparation and marking time often renders the ten hours a week T.A.s are compensated for unrealistic. Overtime payment is available, but it’s littered with a laborious paper trail that renders it prohibitive. According to my contract, I get compensated $29/hr, so the figure he cited is almost twice what I actually make. Furthermore, he said that the 11% wage increase over three years proposed by the union was unrealistic in these difficult economic times. He said that York offered the union 9.25% over three years, but the offer included cuts to benefits and professional development funds that increase the total compensation rate only 2.3%, which is not indexed to the inflation rate of 3.7%. That means in the end that the affected workers will struggle to make ends meet.

His reference to the economic downturn was a purely rhetorical flourish that totally ignores the fact that times of recession are times of boom for universities because people use the time to upgrade their knowledge and skills to be better prepared for subsequent economic upturns. Additionally, Bilyck is not an economist, and he has no expertise when speaking about the effects of the slumping economy on York’s revenues. Furthermore, history has shown us that the knee-jerk reaction of many people to a recession is to stop spending money. If York skimps on our wages, we have less money to spend, and therefore less money to stimulate other sectors of the economy, leading to a further worsening of the depression.

This transferral of blame for the stoppage from the Administration to the Union rings false on two fronts: it is contract faculty and Teaching Assistants who are largely providing the substative intstruction, and the Administration’s unwillingness to negotiate. While tenured professors lecture in halls that hold hundreds of students, substantial chunks of whom are surfing facebook and other unrelated websites, T.A.s and contract faculty deliver instruction in smaller settings, where learning takes place more effectively. This is not to deride the considerable talents of York tenured professors, but facts are facts. Also, the Administration’s offer of binding arbitration “is the University's way of avoiding negotiating with us. Binding arbitration is appropriate when there are one or two sticky issues holding up a settlement NOT when one party has hardly been negotiating at all” (Quoted from an CUPE 3903 email).
Posted by Trevor_Cunnington at 1:34 AM No comments: 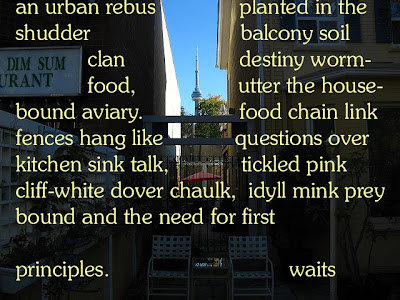 Posted by Trevor_Cunnington at 11:30 PM No comments:

Good victory speech. Congratulations on your win! I certainly hope that you can be the change that you hope to be.

Posted by Trevor_Cunnington at 12:27 AM No comments:

Think about it man! Magnetic Resonance Imaging for Artificial Intelligence. I want to get a video feed of that.