Kasparov, young and cocky
from last year’s match
sits down at the knotted wood table
on which the flat chess board
sits, tessellated with white and black
space
and the pieces glower in anticipation.
a man sits across from him, a cypher
carrying out the instructions of a machine –
Deep Blue – a black tower with silicon chips
inside
that pulse with coded information.
move, countermove. again. a gain.
hundreds of millions of possibilities
course through the computer’s circuitry.
then, Blue forces Kasparov into a bad move.
a shadow flickers across his face, a twitch
he cannot be aware of.
he sees it, the mistake played out
in quadratic lines blurred by time.
the recognition contorts his face;
he can’t believe what he’s seeing.
he pushes the table away in frustration
and stands up, walks away: one fluid motion.
the people watching open their mouths;
History has been made today.
soon human dominance will fade
today chess, tomorrow the novel,
the next day brain surgery.
humans will have to stake their claim in a world that
doesn’t need them
any more.
Posted by Trevor_Cunnington at 1:08 PM No comments:

How can we reconcile the anthropological concept of cultural diffusion with the arising critique of the practice of cultural appropriation? I will never argue against the idea that systematic oppression exists, or that it marks with trauma wherever it goes, but the instinct to always protect against hurt -- a noble one surely -- is it always in our best interests? When I was hurt, I knew where my cards lay, where others' cards lay, so I could best play the hand I'd been dealt. The asymmetrical power of a host and a minority culture makes the profiteering off the minority culture certainly odious in a Marxist framework of understanding.

Critiques of cultural appropriation tend to be morally consequentialist. That is, they focus more on the outcomes of actions and behaviour, rather than on the motivations and intents of the actors in such actions and behaviour. They argue that the harm done to those traumatized by oppression by these images, by the act of appropriating culture, often rooted in rude parody, taken up by the host culture renders them morally suspect at best and simply morally wrong at worst. They tend to discount the intent of any member of the host culture as insignificant to their moral calculus, to use a term of William Vollmann's. Certainly the appropriation of cultural practices can come out of a place of respect, admiration, and love. But by sacralizing the trauma of the oppressed's experience, by prioritizing theoretical future pain against any notion of beneficial intent, they reify it and make it harder to overcome. I tend to lean consequentialist, but I must admit outright eliminating considerations of intent makes me uncomfortable. But who knows. . .perhaps this is white fragility, and perhaps they are right.

We cannot be killed with even a thousand paper cuts. On the other hand, pain is an obstacle to pragmatic organizing in anti-oppression work. Humans have always learned from each other; learning is always an appropriation. How am I, as a white guy, supposed to engage this great "shut-up and listen" exercise, without being somehow influenced by what I hear, by taking it to heart (too much, some will whisper to each other behind their backs). And hasn't this "taking it to heart" affected me, consciously and unconsciously, such that I might not appropriate that culture without any conscious intent at all, but simply through the processes of psychological sublimation and Freudian slips? Does this not produce a cyclical relationship between host and minority, where I listen, learn, appropriate, then lose the cultural war? Nobody likes losing all the time. Cultural diffusion: contact produces sharing, whether you like it or not.

One thing that irks me about cultural appropriation debates is how inconsistently they are applied. A straight, white man writing through the voice of a black woman is a no-no, but a Korean family in Toronto opening a Sushi shop is a-ok. Again, here is where the asymmetrical power card comes in handy, because we can aver that the Korean family is making a peer-to-peer cultural appropriation, whereas the white man, even if he is "raising awareness" of issues faced by black women,  is making a downward appropriation. No Korean family is going to chastise a white guy eating in their restaurant, no matter how blatant a downward appropriation it is because you don't bite the hand that feeds you. The irony cuts both ways. That Korean family could not give a flying $^$# about cultural theorists' arguments about appropriation, or they might have a college-going child who does, at most.

Posted by Trevor_Cunnington at 4:25 AM 2 comments: 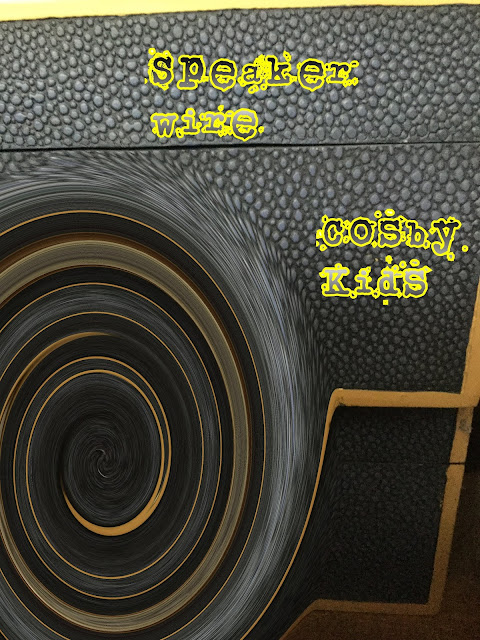 Posted by Trevor_Cunnington at 4:59 PM No comments: 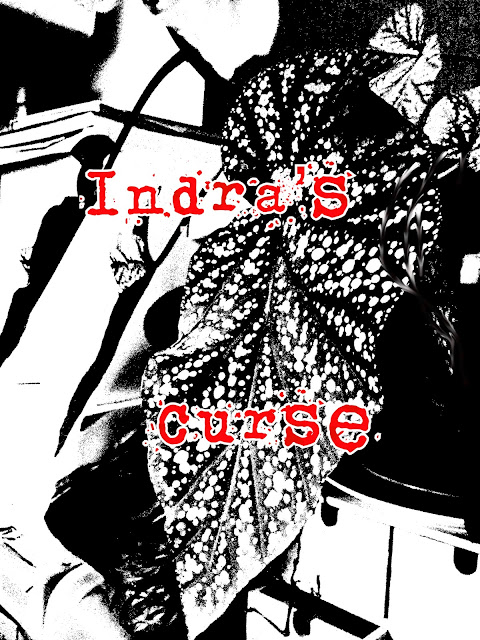 Posted by Trevor_Cunnington at 4:55 PM No comments: 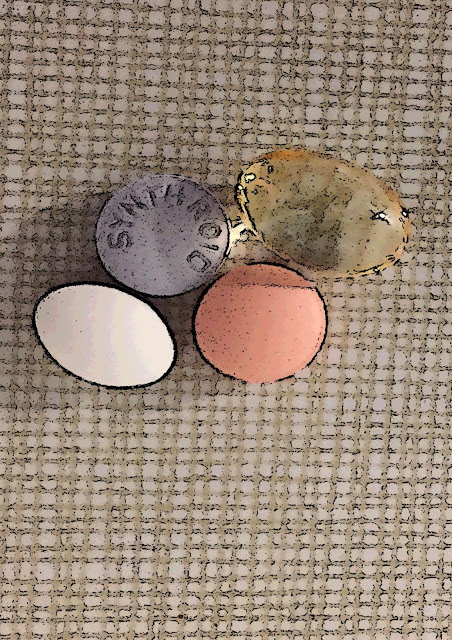 Posted by Trevor_Cunnington at 8:43 AM No comments:


The sound of aggregate activity
Breezy in the late, stabbingly bright blue
Of an afternoon
Soft yellows caress
The late-out-of-the gate lilacs
Smelling sensual, lurid.
What rest can be got from this swirl
Of smells overpowering
Malefactors everywhere
Actors and blinks, nods, and who’s hooligans.
Read them the Cactus riot act.

She flowers every seven years
Or if the new moon follows on the first
Friday after Easter infection,
Then, only then, will she spread her. . . petals
It was in a photograph, or –gram
Heavy metal pelt stain melt brain; ham radio
Operator; one caught in the electricity
Wires.

I saw him on my walk home from world.
Singing ‘ole glory to the world,
A face turned murderous
As if a cloud smirched the soulful sky.

In the corner of the photograph,
A figure in sticks, wrapped in the dangerous
Sourcery of the exorcism,
Darkness swirling off him in colour grids
Dextrous fingers of the toppling dominoes
In the foreground, under the table,
Barely visible.

Flim flam, hone it for the street corners.
In the hides of summer, wearing
Sun’s great glory on the sweat-sheened skin

Precipitating the “oh, not the ‘we’ shit again.”

The happiness of a single fuck not given
The apathy trickle-down vectors
Swerving high on unpredictable
Ever veritably new, improved
Dazzling desuetude.

Suet in a fur-trap.
A straw, balanced on a camel’s back,
Photographed.

For a response to a query
Responded to and refuted
From every corner of the crypto-verse.

The cacti, in a row, made a fence
To keep the cattle in,
Some do it,
Some don’t.

The next time she appeared,
A blue streak ran rampant around
The orbituaries climbing out of the newsstands.
Surprise factor, attention disperser.

This is poetry’s rent.

Tantamount to a slope of fine powdered salt
To cushion our 20 feet jumps
Down a steep incline.

Don’t think too much
Or you will start to smell the cowpaste
Piling up in the meadow. 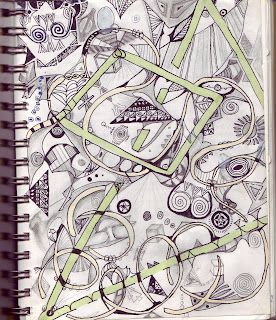 Posted by Trevor_Cunnington at 4:58 PM No comments: 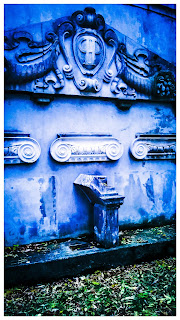 Posted by Trevor_Cunnington at 11:50 AM No comments:

love, a catafalque
decorated with celtic knotwork
bearing a loved one, soon to rest
under epitaph blankets

the ceiling of our aspirations, sistine
cages that entrap soul-vapours that
should disappear up the chimney's
conglomerate, the gates of sinuses
flush with that histamine rush


love, a dorian pillar embellished
by gargoyles, guardian angels
long since deserted, absent, on
a pilgrimmage to pleni-potential.


love, an arched proscenium, a window
between observer and observed
occluded by thick clouds, delicate
light grey billows weighing on
lungs during a scene change


love, the doorway you huddle in
during an earthquake, plaster hail
raining all around, plunging a trail
through floating, churning dust


love, that bitter metal taste
of carbonic acid after drinking
a vanilla coke.
love, the unending war
against dust.


love, that idol of idols,
that fire inside,
that phoenix
singing songs
that resound
through the ages,

catafalque - a raised platform on which a dead body is placed
pleni-potential - a play on "plenipotentiary," a person with the authority to act on behalf of another
histamine - a chemical released by cells damaged or inflamed by allergies
conglomerate - a pebble and rock composite held together with cement
Posted by Trevor_Cunnington at 12:07 PM No comments: